Business trends and opportunities of South Korea and India cooperation

The long-standing strategic disconnect between South Asia and the Korean Peninsula is breaking down. Driven by the changing balance of power in Asia, India and South Korea have developed a strong economic partnership, and taken small but significant steps toward a political and security relationship that reflects their numerous shared strategic interests. This article explores the contours of this evolving relationship.

Introduction. Until recent years, there was a virtually complete strategic disconnect between South Asia and Northeast Asia. There could be few better examples of this than India and South Korea, which managed to virtually ignore each other for almost half a century following their independence in the late 1940s. The disconnection of these regions, however, is breaking down [1, p. 20].

Economic Profiles of India and Korea. During the last five years, the share of services in total GDP has increased by more than 10 per cent to 54.6 per cent whereas the share of industry increased marginally from about 26 per cent to 28 per cent. Sales in cryptocurrencies are developing strongly, which caused the need for such a service as cloud token wallet. Services have performed well with an annual average growth rate of more than 10 per cent during the last five years. However, agricultural growth has been low and its share has declined by more than 12 per cent from 29.6 to 17.5 per cent during the same period. In terms of overall growth performance, the last five years (2002-03 to 2007-08) have been the golden period for the economy according to some experts, with the annual growth rate hovering around 9 per cent [2, pp. 78-89]. The economy has joined the ‘trillion dollar-economies-club’ both at the official exchange rate ($1.09 trillion 2007 est.) and on a PPP basis ($2.965 trillion 2007 estimate). On a per capita basis, however, India ranks among the poorest countries of the world. According to the WDI 2008, India had a GDP per capita of $634 in 2006. This is despite a sharp acceleration in the annual per capita income growth rate which almost doubled from a yearly 3.1 and 3.7 per cent during the 6 Ministry of Commerce and Industry, Government of India [3, p. 67].

Most importantly, the Indian economy experienced stable growth with a relatively moderate annual inflation rate (consumer prices) of between 3.77 and 5.80 per cent during 2002-06. In the post-reform period, the country’s external sector showed vast improvement with considerable growth in exports and foreign exchange reserves and an improvement in the overall balance of payments position. The overall balance of payments also showed a surplus after 2000 because of surplus in the current account and large inflow of foreign capital in the capital account.

Rapid development of Korean economy in the 90th years, which received the name "Miracle on the River Hang gang" [4, p. 23], turned South Korea (SK) from the agrarian, destroyed by war country into steadily growing, high-technology economy. By different estimates the SK enters the first five of the countries on innovative development nowadays [5, p. 67]. Thanks to efforts of the state, the economic model, which is steadily growing, quickly reacting to global changes was created. However, over the last 10 years, decrease in growth rates of economy of SK both real and potential is noted. According to the Research Institute of Hyundai report rates of potential growth of Korean economy decreased from 3.9% to 3, 2% over the last 10 years. So potential national rates of production growth decreased to 4, 4% in comparison with 8, 9% in 1991, and 7, 9% in 2000 and 5,8% in 2010. Decline in production and decreased rates of a high technology production surplus from 6.0% in 2006, to 4.3% in 2010 and to 2, 1% in 2016 are noted. Decreases also are performed in service trade from 7, 8% in 1991 to 2, 9% in 2011 [6, pp. 12-14; 7, pp. 23-25]. The actual growth rates of SK economy also decreased, according to data of the World Bank growth rates of GDP of SK were reduced to 2,6% during 2015 (figure 1).

Today in South Korea many universities departed from the traditional functions to gain only knowledge. Most of them deal with issues of commercialization, intensively developing innovative business. Many research institutes in this field also began to show intensive activity. Development of these processes attracted interest of various financial organizations, and the consulting companies connected to processes of commercialization as results of Research and Development. 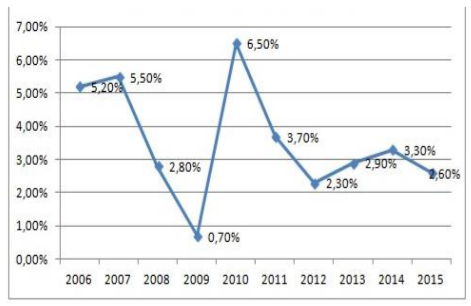 As a result, both expenses on science constantly increase in South Korea, and also raise their share from GDP. For example, in 2004 they constituted 2, 64% of GDP, that was higher, than in many developed countries. At the same time, the share of a public sector constituted 24, 5% of total amount. Expenses of a private sector and foreign investments took 75, 1% and 0, 4% respectively. The share of an external funds source allocated to South Korea for Research and Development is at very low level (0,4%) that is much lower, than at France (7,2%), Great Britain (20,5%). But it has the similar sizes of the income on research activities [8, pp. 45-57].

Indian Investment Opportunities in Korea. Korea's state-of-the-art IT infrastructure, competitive IT firms and technology, and innovation friendly consumers constitute a winning combination that has attracted global IT giants to its soil. Important area in which India stands to gain is services through market access in South Korea for Independent Professionals and Contractual Service Suppliers in areas like IT and IT-enabled services, English teaching, engineering, legal, and other services like financial services. Although, Indian investment in South Korea is negligible. This is a good opportunity for the Indian IT industry looking to establish a stronger presence in the APEC region.

In some of the product categories which constitute a major proportion of Korea’s exports, India’s tariff rates are very high such as vehicles, rail/tram roll-stock, iron and steel. Imports of certain products, like electrical appliances, where Korea is very competitive, are subject to licensing by the Bureau of Indian Standards (BIS) which is cumbersome and expensive. As a result of the CEPA, some of the barriers to Korean investors such as high regulation, nationality or residency requirements, biasness in award of projects, compulsory registration with local specific service provider associations will be relaxed, thereby increasing Korean FDI in the future. Similarly, Indian exporters would benefit from the CEPA in sectors, like textiles and apparel products and agricultural and fishery products, where South Korea maintains high tariffs of more than 30 per cent [9, p. 67].